The scientific name of the cocoa "Theobroma", from the Greek meaning "food for the gods", was given to this plant by Carl von Linné in the middle of the 18th century. This name was chosen by Swedish naturalist and creator of a unified classification of living beings for an ulterior motive: at that time in Europe was known about the unsurpassed taste, nutritional and medicinal benefits of cocoa. In South America, the birthplace of the cocoa tree, people since before BC attributed its divine origin: the Mayans used it in the sacred rituals, and the Aztecs revered it as a gift of the "feathered serpent" god Quetzalcoatl and used as a cash equivalent.

In 1519 Spanish conquistadors came to Central America. The Indians, not knowing the true intentions of the "guests", generously treated the newcomers with the divine drink, among other gifts. When the Spaniards arrived at the looting of the treasuries of the Indian Empire, they found multi-ton reserves of the precious cocoa beans, presented to the emperor by residents as a tax.

Until the middle of the 17th century, cocoa beans were imported into Europe from Central America only. At that time, an exotic drink was the prerogative solely for royal families and the palace because the price was genuinely fabulous. By the way, the taste left much to be desired. Europeans couldn't make cocoa properly: the drink was too bitter, and its popularity was due to fashion and "exclusivity". However, a bit later in the recipe was added sugar, cinnamon, and vanilla, and in 1828 the Dutch invented the technology of manufacturing the solid chocolate bars, which come almost unchanged to the present day. In the Age of Discovery, as the capture of the Europeans in the Americas, Africa, and Asia, "chocolate tree" plantations were gradually taking root in new areas. Commodity prices began to fall, and the taste of the finished product, in contrast, was rapidly improving. His Majesty Chocolate started its triumphal march around the modern world, capturing more and more human hearts.

For by-cosmetics products, we buy only freshly harvested cocoa beans of the highest quality. It is not difficult for us since we live in Bali because Indonesia is the second-largest exporter of cocoa, its share in the global market is 13%. The well-known fact that in Asian countries, local manufacturers of cosmetics and food products sometimes have big problems with sanitary, health, and safety regulations due to negligence and careless attitude. Raw materials, which become our butter ingredients, are not cheap - it has passed the strict government control and has all the quality certificates. Our factory is modern buildings and equipment in compliance with the maximum sterility of the manufacturing process. 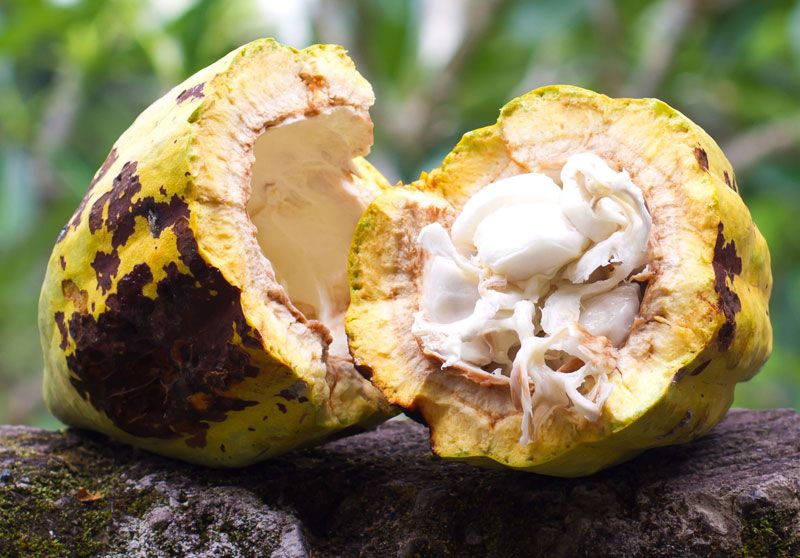 Four centuries ago, scientists and physicians marked unusual properties of the cocoa fruit. According to handwritten testimony Jesuit monks, which meticulously collected information about customs and manners of the enslaved people, it says: if you drink a lot of cocoa, you will get "stupefying, intoxicating and crazy", but in a moderate dose, it "refreshes, soothes the heart, softens people ". Ancient inhabitants of America used cocoa butter as a wound-healing elixir and made the tone and agility legs during long daily crossings.

What are the benefits?

The cocoa beans contain more than 300 minerals, trace elements, vitamins, and chemical compounds, which confirm their status as "divine elixir." Here is an incomplete list of this helpful stuff:

Cocoa beans also contain caffeine, but in much smaller doses than, for example, coffee or tea, only about 0.2%. It's a small amount, so if you do not suffer from hypertension, such concentration can hardly hurt you.

How do farmers make raw materials from "chocolate tree" fruits, and in which industries and human activities it is used?

Let's look at a nearby plantation of cocoa beans. 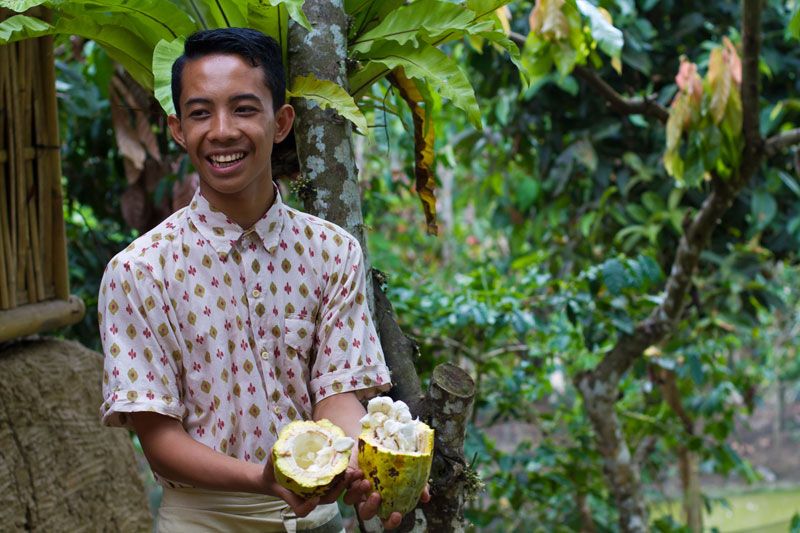 So, the cocoa fruits ripen entirely for four months after being harvested, cut into several pieces, and fermented. After that, the beans are dried in the sun or special kilns, roasted, and pressed to obtain cocoa butter. The most valuable is the oil obtained by pressing unroasted, defunct raw beans, which have passed only the fermentation and drying. In this case, it can preserve all valuable substances, vitamins, and minerals in the absence of heat. The dry residue after pressing is ground to obtain a cocoa powder. The resulting raw materials - cocoa butter and cocoa powder - are needed in the pharmaceutical, food, and cosmetic industries.

In cosmetology, the beneficial properties of cocoa butter are used to rejuvenate the skin, as it has a tonic and healing effect. An effective way to deal with stretch marks on the body is using cocoa butter and cocoa powder for massage and body wraps. The cocoa butter in the composition of hair masks gives an excellent result - stronger hair by stimulating blood circulation in the scalp, growing faster and getting thicker.

Priceless properties of cocoa butter we use to the full in the manufacturing of by-cosmetics products. All recipes designed to nourish, moisturize and protect the skin from external influences come with cocoa butter. This product line of our body butter – Desire Body Butter, Desire Body Butter, Miracle Body Butter, One Love Body Butter, Simple Pleasure Body Butter. The application field for body butter is extensive: immediately after the shower, when cocoa butter and other valuable ingredients give all their benefits to your skin; before using a swimming pool - a thin film of natural oils protects your body from the effects of chlorine and other chemicals used for water purifying; during sunbathing – cocoa butter has a natural SPF 10 to 15 units.

It's all about chocolate

It makes no sense to describe in detail all the tastiness of cocoa. Cocoa butter and cocoa beans are the essential ingredients for chocolate and countless confectionery delicacies based on it, both in industry and homemade. Talking of chocolate: when you select this delightful product, you should always pay attention to the composition indicated on the label. Quality chocolate consists of just three ingredients - cocoa butter, cocoa powder, and sugar. That's the ticket! Did not include the remaining alloys, such as confectionary vegetable fat, emulsifiers, flavorings, and all that are dangerous to your health in the above shortlist. Not without reason, chocolate has been recognized as the most hazardous sweet because of the large number of synthetic additives designed to reduce the cost of the final product.

Cook your chocolate in our original recipe. To make this treat please you and benefit your body, we recommend using ingredients that have not undergone heat treatment. In this case, it will save all vitamins and minerals.

Melt the cocoa butter on the water bath, chop cocoa beans, mix them with cocoa butter, and then add the syrup or honey. Then pour the chocolate into the silicone cups and put it in the freezer. 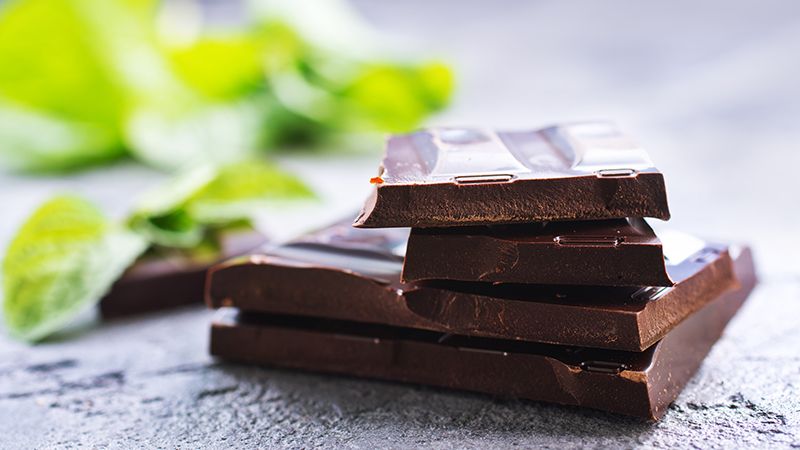 In medicine, there is a wide variety of using cocoa butter: this product has a strong antiseptic effect and is used in the composition to treat colds, including influenza, bronchitis, pneumonia. Also, it effectively treats gastric and intestinal diseases, is used to prevent cancers, promotes the removal of excess cholesterol from the blood, makes it possible to avoid the development of atherosclerosis, and reduces the risk of varicose veins.

As you can see, with the good reason all of us in childhood adored hot aromatic cocoa and chocolate goodies: a familiar and favorite product has a lot of beneficial properties for the human body. However, we want to remind you again and again how important it is to comply with the measure and choose only quality goods. Treat yourself with chocolate and be healthy!

The purification protocol is just advice. Before using the inside, be sure to consult a qualified therapist!

Course length: 21 full days. Take drops on an empty stomach in the morning and 20-30 minutes before breakfast, lunch, and dinner. Pre-mix the drops in 1 tablespoon of base oil (olive, coconut, linseed, etc.) or encapsulate.

Then we continue to take according to the scheme of the 6th day for 21 days.
For the quickest release of toxins from the decay of parasitic multicellular representatives of our microcosm, I recommend that you carry out a rectum cleansing procedure (enema) once a week.
If at some stage, you feel unwell, nausea, dizziness, any symptoms of intoxication, in this case, you need to take a step back, but without stopping the intake of the oil, to the comfortable dose.
It is better to refrain from heavy food, drink more fluids, or spend a juice day during this period. Enema, sorbents will also help release toxins and easier to cope with the state of intoxication.
When the condition stabilizes (1-2 days), continue taking oil according to the above scheme.
During the course, I recommend drinking more fluids, especially plain pure water.
A black, gray, yellowish coating on the tongue will also indicate the beginning of the cleansing process.
Discharge from the genitourinary system is also possible. The intensity of the release depends on the problems in the genitourinary system.
An important point! Record (write down on a piece of paper) your state at a given time before starting the course (eating habits, gastrointestinal problems, allergies, fatigue, etc.). After the period, you will be very pleasantly surprised by your changes new I.

P.S. It is essential not to skip taking drops of clove oil and strictly follow the frequency of its intake. Good luck!